This summer I am putting together two teams, a Squirt (2003/2004) and Pee Wee (2002/2001) age group, composed of Central New Hampshire players to train for a month, and then go compete in a showcase tournament in Exeter, NH. Given that they take up the ice at the Laconia Ice Arena from April to August, the idea is provide an alternative to hanging up the equipment for this aged group of players in the Lakes Region of New Hampshire. Moreover, the team will get advanced training and coaching in a fun and competitive environment, so that they can prepare for their Fall & Winter Seasons.


* One 1 on 1 private skill training session on synthetic ice


* Participation in the Summer Showdown AA tournament in Exeter, NH 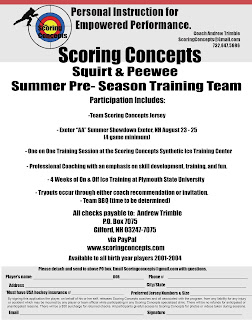 Posted by Andrew Trimble at 6:49 AM