Coaching is an interesting profession... no two days are the same.  Every variable is constantly changing, from the attitudes and perceptions of individuals, to the motivation and characteristics of the collective team, on a day to day basis getting through and being effective takes great attention to detail.

Here are some ideas...

Poll finds Huge Gap in How Employees Are Recognized and How They Want to be Recognized
Managers have a lot to learn about employee recognition according the results of a recent national Maritz® Poll. Over one thousand full-time employees were asked to compare companies’ reward practices to employee preferences. The results show there is a significant gap between how employees are currently recognized in the workplace and how they actually want to be recognized:

Information taken from- http://www.super-solutions.com/EmployeeRecognition_MotivatingEmployees.asp#axzz1bnlGygmF
Many of the statistical data can be applied to a similar "team" setting...
Consider this other statistical example-

Hockey is easily the most costly of the team sports.  "Nick" has been playing since he was five and this year, says his father, "John", 46, the family will spend over $4500 a year for the hockey habit.  The equipment alone will cost $750.  Some parents hope their kids win college athletic scholarships.  But think about it.  If you spend $4500 per year for 10 years of youth sports, you can pay for the college education.  Robert Malina, director of the Institute of Youth Sports at Michigan State University, says the parents would be better off putting the money they spend on travel teams into a savings account.  According to the National Center for Educational Statistics, fewer than 1% of the kids participating in organized sports today will be good enough to land a college scholarship....
Studies show that 73% of kids quit their childhood sport by age 13 because it ceases to be fun.


Coaching is constantly evolving.  This blog entry was started primarily because I recently finished the above book by Tony Dungy "The Mentor Leader" and would highly recommend it to anyone who is interacting with children, or working in a management capacity. Mr. Dungy has published other books that are equally as terrific, "Uncommon" comes to mind, but as I prepare for my High School Hockey season, his newest book is most fresh in my mind.

Take the above statistics on managing people, and properly motivating them.  Infuse your own person style, and be creative, but focus with the long-term ambition in mind...

Although I am relatively new to coaching, I find it to be the most stimulating endeavor I've ever undertaken. 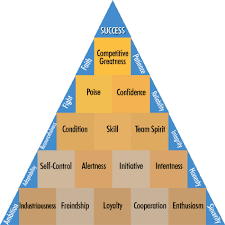 Posted by Andrew Trimble at 7:09 AM No comments:

I had one of my favorite private lesson student's Father ask me the other day about what his son's coach was really meaning when he was saying "Control your Gap" or "Gap Up"...

These are common hockey coaching terms, but need to be drilled down deeper, to get a greater understanding, specifically for youth hockey players, so that they learn the right way.

* The 'Gap' is the distance between a defenseman and a forward attacking your defensive zone with the puck. When playing defense, it's important to be aware of the gap, but judging the amount of gap to leave is not always easy, as all forwards attack with different skill sets and at different speeds.

A Gap too wide will allow the forward to cut to the inside, giving away the center of the defensive zone.  This is an area I call the "shooting zone" as it gives players the best angle and most net to shoot at, as well as, rebounds generally come back out in front or remain in the prime scoring area, rather than wrapping around the boards and out of the zone.

A Gap too narrow, and you run the risk of letting the forward skate by you with room behind to make a hard cut in front of the goal.

A common mistake youth defenseman make is to leave too much gap. This makes it far too easy for the forward to move to the middle of the ice for a  nice scoring opportunity.  Consequently, because of the fear of failure, inexperienced defensemen fail to "gap up" out of the zone and stay deep in their own end fearing to get beat by attacking forwards.  From a skills perspective this is equally as troubling, as it hinders the development of defenders skating ability.  In all situations, I'd rather have defenseman get beat to the outside and learn proper pursuit angles, then fear gapping up and giving away too much of the middle of the ice.

Focus on once the forward crossing the blue line to tighten the gap, and use your body positioning and sticks to communicate.   Sticks should be out in front and on the ice taking away the "shooting zone", knees should be bent, and defenders should be inside the face-off dots. Force players to the outside, by giving them no room to attack the middle, and the illusion that they can turn you.. While there is always the chance he will get by you, at least he will have a sharper angle to the net, and you can pursue to the inside near goal post, cutting away a hard cross in front.


Gap Control on the Off-Wing

A forward coming in on his strong side has to expose the puck by bringing it in front of you as he cuts toward the middle of the ice. Leaving a wider Gap, encourages the forward to try cutting into the middle, rather than going to the outside. This gives you a better chance to poke the puck away.

If the forward is on his off-wing and you play too loose a gap, he can cut to the middle of the ice while protecting the puck with his body. That’s why you need to play a tighter gap in these situations.

Remember!!!  Always keep an active stick (stick on the ice moving to cut off passing angle and ready for poke checks), focus on body positioning ( your outside shoulder on his inside shoulder), ice location (stay inside the face-off dots), winning pursuit angles, and to pay attention to if he is a right or left shot and what side of the ice he is attacking from....  If you do this your Hockey IQ will win you battles and make you tough to beat.


Posted by Andrew Trimble at 8:25 AM No comments: