Scoring Concepts has had a great spring, summer and fall run.  The amount of new kids & families we've been able to reach each and every week, with positive feedback, has given my wife and I enough confidence to expand our borders.

Being that we will be up in Gilford for a few days around the Christmas Holiday visiting with her family, I thought it'd be great to set a 90 minute clinic in the rink where I first met her... Laconia Ice Arena. 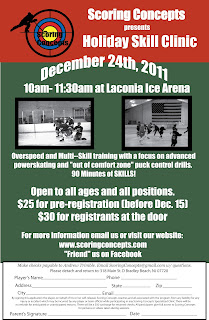 What should you expect from a "Scoring Concepts" Clinic?
﻿Here's the August 10th Skills Workshop broken down by the numbers-
* Players had the puck on their stick for a minimum of 40 Minutes (almost 300% more than the average game)
* Players participated in 47 minutes of drills involving shots. Each player took roughly 30 shots, compared to an average of 1 to 2 shots per average youth hockey game.
* 12 minute small area game had no line changes.  This is equivalent to the same ice time a player would recieve in a full 3 period youth hockey game if the team had 3 lines per squad.  The small area games develop communication and game sense skills that are difficult to develop in any other format.
* Players were given feedback and instructed on their powerskating (which represented 30 minutes of  drill work at the clinic). As stated in the OMHA study, "99% of the feedback coaches give players is when they have the puck. Ironically players only have the puck on their stick for 0.2% of the game."

A recent article in the "New England Hockey Journal" (October 2011) pointed to a decrease in NHL players coming out of VT, NH, CT, and Mass.  How a decade ago some of the NHL's brightest stars (John LeClair, Tony Amonte, Jeremy Roenick) grew up in New England, and now New England can not claim any true Superstars born and raised in the region.  Pointing to sun belt expansion and european influence, the article detailed a troublesome trend... that New England- based youth programs are focused on increasing game totals, rather than paying attention to skills and skill development in practice.

Scoring Concepts focuses 100% of its clinics on skills.  The format wastes little to no time on setup, and kids learn in a competitive, yet fun atmosphere.... perfect for any attention span!

Email- scoringconcepts@gmail.com with questions.
Posted by Andrew Trimble at 6:35 AM